The Demonstration:
The volunteer puts her hand on the metal ball and her hair stands on end.

Quick Physics:
The Van de Graaff generator works by static electricity, like shuffling your feet across the carpet and shocking yourself on the doorknob. Big rubber bands move over a piece of felt and strip away the felt’s electrons. The electrons move up the rubber band to the metal ball and into the person. The electrons repel each other, so they try to get as far away from each other as possible. We see this effect when the volunteer’s hair moves as far away from the body as it can!

The Details:
A Van de Graaff generator is a device for making lots of static electricity. Static electricity is made from extra charges stored some place so that they can’t move. Normally charges don’t like to collect in one place. They like to find opposite charges as partners and run away from particles with the same charge. The Van de Graaff generator used in the demonstration can store up to about 300,000 Volts of the same kind of charge. Compared to the normal house voltage (about 120 Volts) that’s a lot!

The generator makes static electricity the same way you do when you rub your feet on the carpet and then touch a doorknob. Inside the generator is a giant rubber band that rubs across a piece of felt, stealing its electrons. The rubber band then spins around and the electrons travel up to the big metal ball on top. If you have a hand on the metal ball, the electrons will go into you.

Generally, the stored charges on the Van de Graaff generator want to try to get into the ground. The earth is very big and the negatively charged particles (electrons) can get very far away from each other. If a metal ball, which is connected to the ground if brought near the generator, the charges will jump through the air from the generator to the ball.

If you touch the generator, all that electricity will go through your body giving you a big shock. It can actually be dangerous. You can be protected from the ground by standing on a piece of rubber or plastic. We say plastic and rubber are insulators since charges can’t travel through them very easily. When you touch the generator now, the charges can’t get to the ground. You are now filled up with electrons. The electrons don’t like each other and are trying to get as far away from each other as possibly. Usually this makes your hair stand up because it is filled with electrons that are repelling each other.

Note: This demonstration does not work well on humid days, so we often don’t use it in the summer or any rainy days throughout the year. 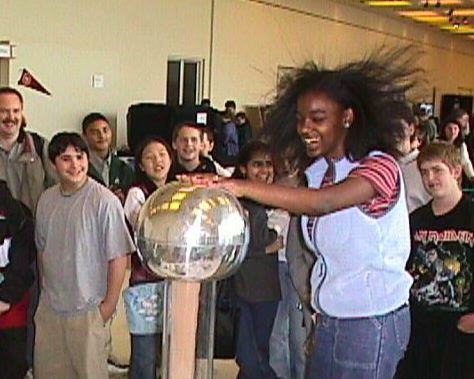 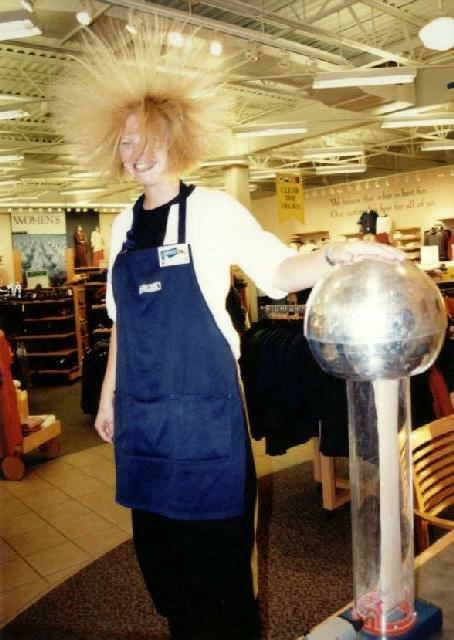