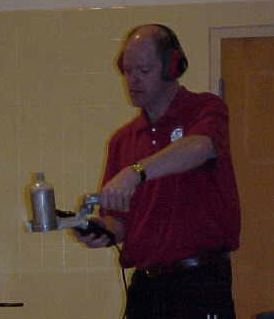 The Demonstration:
A bottle with ethanol vapor is touched with a spark, which blows the cork off the bottle. This simulates how a car’s combustion engine works.

Quick Physics:
This is the same way a spark plug works. The spark ignites the fuel in the chamber and causes an explosion, which increases the pressure in the bottle and blows off the cork.

The Details:
The ethanol vapor explosion demonstrates that things expand when they get hot. However, instead of just being heated, the ethanol actually burns. Ethanol is a kind of alcohol made from plants. When something burns, it changes from one chemical to another. When ethanol burns, it mixes with oxygen in the air to make water vapor and carbon dioxide.

A little bit of ethanol is put inside a bottle and then the top is sealed with a cork. Two screws are in the sides of the bottle so that there points almost touch. The bottle must first be shaken so the ethanol evaporates and mixes thoroughly with the oxygen inside. This makes it burn faster. To ignite the engine, we need some energy, which we get from a high voltage sparker. (See the section on Tesla Coils for how the sparker works.) Eventually, a spark jumps between the points of the screws inside the bottle. The spark ignites the ethanol, which burns very quickly. As it burns, it changes to the hot gases carbon dioxide and water vapor. The heat of the burning makes them expand, causing an explosion. This blows the cork off the bottle.

You may know that cars run on ethanol instead of gasoline. A car engine works the same way as the exploding bottle. Gasoline or ethanol comes into the engine and mixes with oxygen. A spark from the spark plug lights the mixture causing an explosion. This forces the piston out, like the cork in the bottle. The pistons are attached to the wheels, which turn to make the car go. The explosion in the bottle is like a one cylinder car engine.