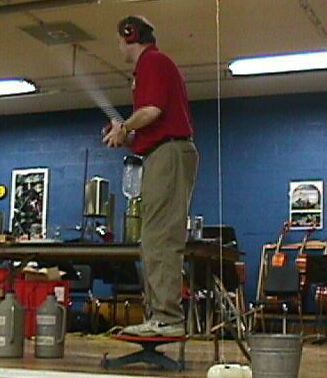 The Demonstration:
A fire extinguisher is used as a rocket to propel the man on the spinning table.

Quick Physics:
Newton’s Third Law says that for every action, there is an equal and opposite reaction. In this case, the CO2 shooting out of the rocket propels the man forward and he spins around on the stool.

The Details:
The rocket demonstrates Newton’s famous third law: For every action there is an equal and opposite reaction. This means that if you push on something, that something has to push back equally hard. If you push on a wall, the wall pushes back on you – otherwise the wall would fall over! Alternatively, when you pull a wagon, the wagon pulls back on you. If it didn’t, the wagon would run into your heels.

Recall our example of throwing a heavy rock from earlier (see Motion introduction). When you throw a heavy rock, the rock pushes back on you making you lose your balance. A rocket works using this same principle. In a water rocket, a little water is put inside the rocket and then air is pumped inside. When the rocket is releases, the extra air pressure squirts the water out. When the rocket pushes the water out, the water pushes the rocket forward with the same force and the rocket flies through the air. Real rockets work with water, too! They burn liquid hydrogen and liquid oxygen for fuel. Then these two burn together, they make pure water. The force of all the exhaust coming out pushes the rocket up. So the toy water rockets is not so far from reality.