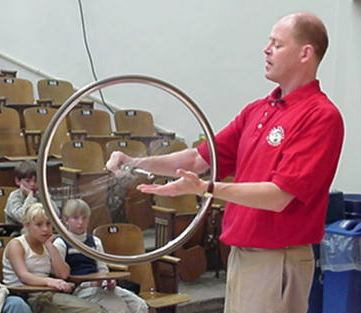 The Demo:
The man is standing on a rotation platform. When he spins the bicycle wheel and turns it sideways, he also spins around. What’s going on?

Quick Physics :
Conservation of Angular Momentum means that the man turns in the opposite direction from the spinning bicycle wheel.

The Details:
This illustrates an important conservation law of physics: the conservation of angular momentum or turning motion. Anything that is turning has angular momentum. This is similar to inertia, only in rotational motion. If a wheel is spinning in one direction, it wants to keep turning in that same direction. If it is not turning, it tries to stay still.

To show this, someone stands on a level platform that can spin around. If she gets on carefully, so that she’s not turning, no matter now much she twists and dances, she won’t be able to spin all the way around. Next, someone else can push her so she starts spinning. Now, no matter how hard she tries, she won’t be able to stop spinning. This is conservation of angular momentum.

Rocket ships are stabilized this way. They have little wheels spinning inside called a gyroscope. When the rocket ship turns, the spinning wheels turn the other way and bring the rocket back on course. Football players also put a spin on the football to improve the accuracy of their passes.