The Demonstration:
A volunteer stands on the spinning table with hand weights. She spins around with her arms out and then brings them in. What happens?

When we give the volunteer some weights in her hands and spin her around, she can make herself go faster by bringing his arms in. This is the same move that ice skaters use to spin fast when they do fancy jumps. When the arms are in, it is easier for her to move, so this means she has less inertia. When arms are out, she moves slower and has more inertia.  The effect is more pronounced with heavier weights, but you can see (and feel) it even without any weights at all. 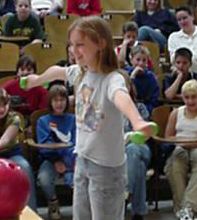 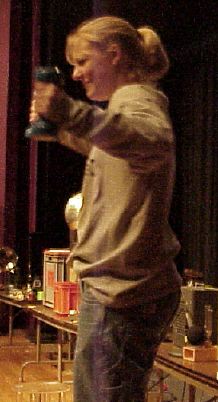