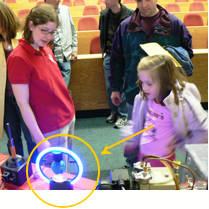 The Demonstration:
The floating globe is a popular desk toy.

The Physics:
The small globe has a magnet in it and the top of the device is an electromagnet. The electromagnet is pulling up on the magnet in the globe just enough to balance the earth’s gravity pulling down on it. The two forces are equal and opposite so the globe floats in mid-air! (Until the table gets bumped.)

Note: Even though this ball is painted to look like a globe, this is NOT how the Earth stays in its orbit. The Earth’s orbit is a result of the gravitational field of the sun, not a giant magnet holding it up in space.