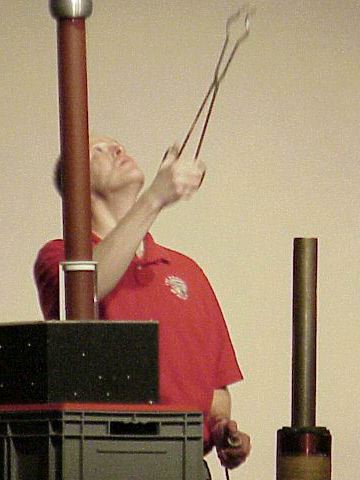 The Demonstration:
An aluminum ring is launched off of an electromagnet. With the iron bar in the electromagnet, it goes even higher.

The Details:
The jumping ring makes a metal ring jump up into the air using an electromagnet like the one described earlier. It is actually two electromagnets in one. Wire is wrapped around a base made of iron. The wire is connected to the electricity and when current flows in the wire, the iron becomes a very strong magnet. The second magnet is a metal ring. It sits on top of the iron base. The magnetic field from the iron in the base causes electricity to flow around through the ring. The electricity in the ring is called an eddy current. The eddy current causes the metal ring to become a magnet. The two electromagnets are arranged so that their north poles point at each other. Two north poles repel each other, so the base and the ring push each other away. Since the ring is very light, it gets pushed up into the air.

When you add an additional iron bar into the electromagnet, it increases its strength. (This is why we used a nail in the previous electromagnet experiment.) A stronger magnet makes the ring jump much higher! If you add a second ring, you might expect it not to go as high because there is twice as much mass. But, there is also twice as much ring to turn into a magnet that will be repelled and it launches just as high.