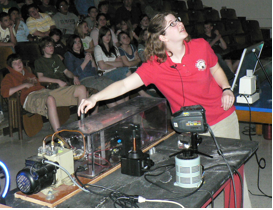 The Demonstration:
A strong magnet is used to move a plasma around inside a tube.

The Physics:
The plasma tube is used to show you the unique behavior of plasmas. Plasmas are extremely hot gases, at least 10,000 degrees! When gases get this hot, the atoms are moving very fast and bumping into each other all over the place. They bump into each other so hard that the electrons are knocked off of the atoms leaving a mix of negatively charged particles (electrons) and positively charged particles (ions). Whenever you see a spark or a stream of electrons, you are seeing a plasma. Other plasmas can be seen with the Tesla Coil and the Jacob’s Ladder.

The plasma tube is a glass tube filled with air. Because it takes so much energy to make a plasma, we have to first pump out some of that air using a vacuum. When there is only a little bit of air left in the tube, we apply energy in the form of a high voltage to excite the atoms of air. The resulting plasma looks like a neon sign that you may see in a store window. There is a good reason for this, as neon signs are also plasmas.

The plasma in the tube can be moved around using a strong magnet. Because plasmas are so hot, the only way to control them is using magnets. Electricity and magnetism are very closely related (see electromagnets). This means that moving charges, such as the electrons in a plasma, can behave as a magnet and be affected by a magnetic field. Scientists use strong magnets to confine plasmas that are millions of degrees!